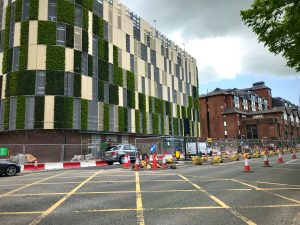 The Council’s Northgate development contractors will be carrying out a series of highways works around the site during May and June to provide access for pedestrians, public transport and vehicles, as construction nears completion.

The works have been scheduled to minimise their impact on through traffic and to avoid forthcoming city centre events, race meetings and the Jubilee bank holidays.

Overnight only closures between Fountains Roundabout and Watergate Street from 8pm to 6am as follows:

To help minimise the impact, the Council is working with the contractors to ensure where possible, that the most noisy and disruptive works are carried out between 8pm and 10:30pm, and to maintain access to and from Princess/Trinity Street and Hunter Street/Sens Close for residents, although some delays may be experienced while the works are underway, and equipment is safely moved out of the way.

Specific diversion routes will be provided each night for traffic using the inner ring road.

Daytime closure of Hunter Street to through traffic between 6:00 and 18:00 for crane access to cinema roof. During the closure, Northgate Street will operate as a two-way traffic flow with exit via Canal Street and the Fountains Roundabout only. Restrictions will apply as per other June closures below.

Daytime closures of Hunter Street to through traffic between 8:00 and 16:30 for resurfacing and paving works. During the closures, Northgate Street will operate as a two-way traffic flow with exit via Canal Street and the Fountains Roundabout only.

To reduce the number of vehicles using Northgate Street, a traffic marshal will be positioned at the northern end of Northgate Street (at the junction with George Street and Canal Street), between 10:30 and 16:30 Monday – Friday, to ensure access-only traffic is allowed.

In addition, to ensure that two-way traffic can use Northgate Street and obstructions can be minimised, loading will be prohibited on Northgate Street between George Street and Hunter Street, Monday – Friday between 10:30 and 16:30 other than in the lay-by outside Chez Jules, where the current restrictions will remain in place.

During the closures, the free Shopper Hopper bus service from the Chester Bus Interchange will stop and pick-up on St. Werburgh Street outside Barclays Bank, instead of Hunter Street, and run every half-hour.