Archaeologists working on the Northgate site alongside the Council’s contractors, have discovered several Roman artefacts which include what is thought to be a rare gaming piece made from bone.

The lozenge-shaped gaming piece is highly polished, probably from use, is approximately 29mm long and features a common Roman decoration of a ring and dot motif.

Experts link this to the game of Ludus Latrunculorum, meaning the Game of Mercenaries, which was a two-player military strategy board game played throughout the Roman Empire, similar to draughts. Finding it in part of a legionary barracks in Chester would back up this theory. Other artefacts found to date include another bone artefact, possibly a comb; a possible spearhead; and a pin or brooch. 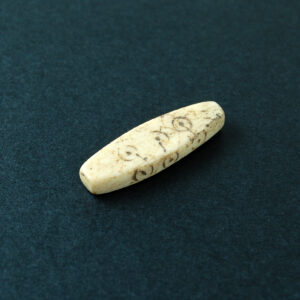 With the Northgate scheme well underway, contractor VINCI Construction UK and archaeologists Oxford Archaeology, have been carefully excavating to find signs of Roman life and other historical artefacts. However, despite all of the activity on site at present, the construction will not result in any major intrusion into the important archaeological remains which remain undisturbed as the works proceed.

The new buildings have been carefully designed to avoid disturbance of archaeological remains as far as possible and a comprehensive mitigation strategy overseen by Historic England is in place to ensure intrusions into the most sensitive strata are kept to an absolute minimum.

Councillor Richard Beacham, Cabinet Member for Housing, Regeneration and Growth, said: “Chester is truly alive with history, and it is pleasing to see such interesting artefacts unearthed as we begin the long-awaited construction at Northgate.

“We will be treading very carefully to protect the sensitive archaeological remains on the site and we will be adding anything we find to our impressive collection of Roman artefacts at the Grosvenor Museum.”

Adrew Davison, Historic England’s Inspector of Ancient Monuments for the North West recently visited the Northgate site to inspect the work to date. He said: “Chester residents are unusually knowledgeable about the City’s heritage, including its archaeology, so these finds will excite great interest.

“They speak volumes about the quality of the archaeology we are dealing with at this very significant site and I look forward to seeing more finds from the site as work continues.”