You are here: Home › News › First stage of removing Clockwise Chester diversions to begin
on 27 September 2021 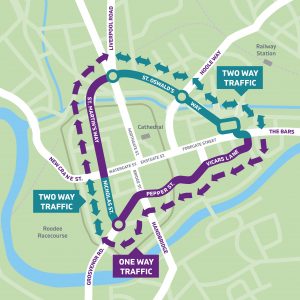 The first phase of lifting the Clockwise diversions on Chester’s inner ring road will begin at the end of October. The move means that two-way traffic will be allowed along Nicholas Street, following the completion of the first five sections of the new surface water drain.

The southbound lane along Nicholas Street between the Watergate Street junction and the Grosvenor Roundabout will allow traffic coming from the Sealand Road direction to turn left or right at the junction with the inner ring road and reduce journey times by removing the need to follow a Clockwise loop to leave the city via the Grosvenor Bridge. The Weaver Street junction with Nicholas Street will also allow for a left or right turn.

Nicholas Street and St Martins Way will remain open to northbound traffic during the reinstatement works but will be limited to one lane until after the Hunter Street junction to enable a safe working area for the central reservation reinstatement.

Work will commence in January to remove other sections of the Clockwise diversions, including to allow southbound traffic from the Fountains Roundabout along St. Martins Way and returning the section along Vicars Lane past the amphitheatre to two-way traffic. Further announcements will be made to confirm the dates and the reopening of Nuns Road and Castle Drive once the remaining drainage tunnel works are completed.

The new surface water drainage tunnel has been a significant investment in Chester’s future and is a necessary requirement ahead of major regeneration schemes and vastly improved city centre facilities, including the first phase of the Northgate development, currently underway and set to open next summer.

Councillor Karen Shore, Deputy Leader of the Council and Cabinet Member – Environment, Highways & Strategic Transport said: “I am very pleased to announce the first stages in the lifting of Clockwise and appreciate that the drain works have caused considerable inconvenience to many drivers.

“Despite facing numerous challenges to the drain works, not least Covid restrictions and material delays, I am delighted to confirm that we can begin the partial lifting in October; and I would like to thank everyone impacted by the drain works for their continued patience over the past year while we complete as quickly as possible.”

More information on the revisions to the Clockwise plan is available at: www.clockwisechester.com