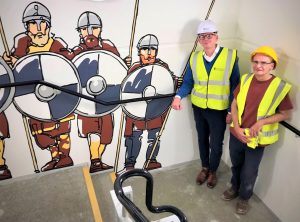 The two stair-cores for the new car park have been decorated with artwork designed by Chester mural artist Graham Boyd with help from other local artists.

The stairs cover each of the car park’s seven floors and have been hand painted with unique murals depicting some famous and less well-known aspects of the city’s culture and history.

The North stair-core titled ‘City of Parades’ features scenes from Chester’s long history of annual parades and events including the annual Midsummer Watch parade with the Chester Giants, the Winter Watch, Diwali and Pride parades, plus the raft race and Passion Plays.

In Medieval and Tudor times, Chester’s Midsummer Watch Parade and family of giants was renowned throughout the country, first held during in 1498.

Also dating from the 1400’s the Winter Watch Parade was held at Christmas when the city leaders would hand over the keys to the city to the Chester Watch, an early police force, after processing around the city to ensure it was secure.

The South stair-core titled ‘Steps Through Time’ brings to life individual characters chosen to represent some of the people who have shaped Chester over two millennia; including Caecilius Avitus a Roman soldier from Spain buried in locally, Vikings, Hugh d’Avranches – the second Norman Earl of Chester from 1071, a Civil War battle and the Victorian architects Thomas Harrison and John Douglas who designed some of the city’s most famous buildings and bridges, including the Eastgate clock.

Some notable civic figures are also featured including Susannah Brown, founder of Browns of Chester in 1780, and lesser-known Miss Frances Wilbraham, a heroine in the Chester cholera epidemic of 1866 who lived in nearby Kings Street. She cared for sufferers at the workhouse and in hospital without thought for herself, described by the then Duke of Westminster as ‘Chester’s’ Florence Nightingale’.

Information panels will provide further details with QR codes for links to additional information online as well as images of the murals for those unable to access the stairs.

A film about the murals is available to view here.

Councillor Richard Beacham, Cabinet Member for Inclusive Growth, Economy and Regeneration, said: “I am thrilled that we have been able to commission these murals to provide an inspiring visual journey and offer the opportunity to literally step through time and learn more about our rich and varied history.

“Rather than the usual dull and featureless stairs found in most car parks, we wanted to enliven people’s experience and first impressions of Chester whilst at the same time learning something about our heritage and culture. This has been a really great opportunity to commission some unique public art using a local artist that encapsulate what it means to be from Chester and the results are fantastic.”

Graham Boyd of Absolutely Design said: “These murals provide the chance to celebrate both what a vibrant city Chester has been over the past two thousand years, and how its current cultural life continues to evolve.

“By commissioning them the Council has provided a fantastic showcase for local artists, all seven of us who’ve been involved live and work in the city. I’m really pleased with the outcome; I can’t wait for visitors to see them for themselves.”

The multi-storey New Market Parking will have access from St. Martins Way via Hunter Street and is currently expected to open in late autumn. It will provide parking for 800 vehicles alongside over 40 EV charging points, an indoor Cycle Hub for 50 cycles and a significantly improved and accessible environment compared with the nearby Market car park that will close once the new car park opens.