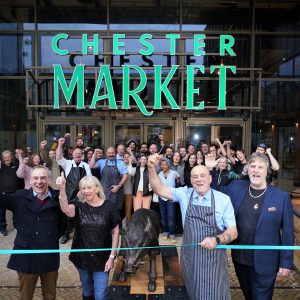 The new Chester Market opened its doors to the public on Tuesday 8th November in Exchange Square off Northgate Street following a sell-out preview weekend; and will be open six days per week and closed on Mondays. Opening hours will be from 8am to 10pm on Tuesday to Saturday and from 10am to 9pm on Sundays.

The new market replaces the market which had been located in the Forum since it opened in 1967, with around half the traders making the move to the new market.

The driving force behind the new market has been to create a ‘modern traditional market’ that takes the best of the new breed of thriving city produce markets such as Borough Market in London, or Barcelona market; combined with pioneering communal foodhall markets in Altrincham and Stockholm, to create a unique blend of produce, goods, food and beverage traders in a welcoming and inclusive space for everyone to enjoy – where you really can shop local and eat global.

The design of the market was guided by extensive consultation with residents and traders prior to construction to ensure it could be fit for purpose, adaptable and sustainable.

Cutting the ribbon at the opening was Geoff Hughes, who first started working in the old market when he was 14, later setting up Geoff Hughes Family Butchers in 1996, together with his wife Debbie. Geoff said, “We are delighted to be able to make the move to the new building, as Chester Market begins a brand-new chapter in what I believe to be a very proud history; we look forward to welcoming all our current customers and gaining many new ones.”

Stalls have been constructed from sixty tonnes of solid oak beams expertly crafted to create a warm and natural environment, alongside a heritage corner featuring an 1875 map of Chester and displays about the archaeology of the site and the city’s rich history.

Four seating areas offer customers a range of options from communal banquette style seating around large tables, to a smaller scale garden area under a beautifully crafted pergola and with outdoor seating along the Princess Street walkway and more intimate seating booths in the mini market area overlooking Hunter Street.

The much-loved Chester in Lego display from the old market will be carefully rebuilt into its new home in specially designed cabinets with some new additions added by its creator Richard Trotter.

The design of the central bar takes its shape from the three arches of the Coachworks Arcade frontage built in 1914 and will be called Lockwood & Co. in tribute to the architects of the coachworks T.M. Lockwood & Sons who designed a number of buildings in the city including the famous black and white No. 1 Bridge Street corner rows at the cross.

The Council has massive ambitions for the new market; to build on the old market’s success and deliver a significant step-change in environment, choice and experience. It will establish a new benchmark for city centre markets, blending traditional character, range and value alongside innovative new approaches, from nutrition to sustainability, creativity to inclusivity for residents and visitors alike.

For more information and a list of traders see www.newchester.market

Zizzi opens its doors at Northgate