You are here: Home › Archaeology of the Northgate site

Archaeologists at work on the Northgate site

The Northgate site is located towards the north west corner of the large Deva Roman fortress which was occupied for over three hundred years from its first construction in the AD 70s. The site included barrack blocks, stores and officers’ living quarters which featured painted plaster work and concrete flooring.

During the works over ten thousand Roman artefacts were found, including over two thousand fragments of pottery, both decorative and practical, from far-flung corners of the Roman Empire such as Spain and Germany as well as items known to have been made locally and in southern England.

Other artefacts found included glassware, copper-alloy keys, tweezers and a rare gaming piece or token made from bone. A triangular roof tile or antefix was also found bearing the name of the Twentieth Legion (Leg XX) and its emblem a running boar, which has been chosen as the logo of the new market in recognition of the site’s Roman history. 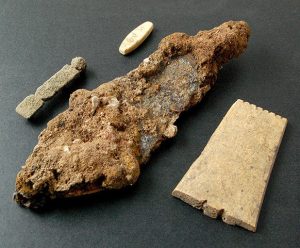 The Roman board gaming piece, top left, and other artefacts found, including a possible comb, spearhead and belt fitting.

Where archaeological deposits could not be left in situ, they were expertly recorded and excavated by archaeologists on site throughout the construction process and these will be passed to the Grosvenor Museum once fully inspected and cleaned.

Watch a short film about the archaeology found.