You are here: Home › Help choose the name for Chester Northgate’s new square and arcade

With nearly a year to go before the Northgate scheme fully opens, we need your help to select the name for the new square and arcade.

Following the submission of more than 800 suggestions from the public earlier in the year, we have narrowed this down to four names for the square and four for the arcade that we think represent the unique history of Chester and the Northgate site.

Please vote for one name from each shortlist before the closing date of 5 November. 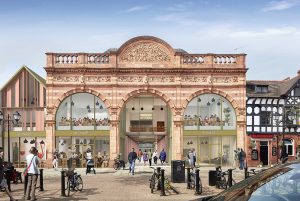 There has been a coachworks on the Northgate site since 1870, the current façade that will form the main entrance to the Northgate site was built in 1914, (formerly the Chester Library building between 1984 – 2017) and outside on Northgate Street was also the coach stop for tours and excursions into the 1970s.

Via means road or passage and victrix means conqueror or winner in Latin; Victrix was the honorific title given to the Chester based Roman XX Legion for defeating Boudica in AD60/1.

Minerva was the Roman goddess of trade and wisdom; there is also a Minerva Shrine in Edgar’s Field in Handbridge, located beside the route of the main Roman road into the Chester fortress of Deva from the south.

In honour of the four generations of Randle Holmes, who were all heralds, sheriffs or mayors of Chester from the late 16th to early 18th century; Randle Holme III compiled the first book printed in Chester, ‘The Academy of Armory’ in 1688 which was a forerunner of encyclopaedias and included an illustrated guide to the goods for sale in Chester Market at the time, some remaining original editions are held by the British Library and Cheshire Archives. 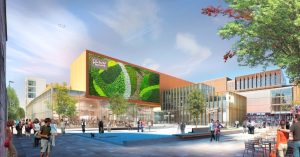 The Latin word for barracks, as there were three Roman barracks located on the Northgate site.

After the name of the original Market building opened in 1692 that was located very near to the Northgate site and burnt down in 1862.

The Northgate site was previously the Medieval market gardens for the city where vegetables and fruit were grown and sold in the market.

The Northgate site was one of the largest and most important Roman fortresses in Britain and was occupied for almost 400 years.

Thank you, we hope to announce the winners before the end of the year.