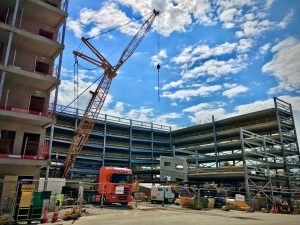 To provide space for a large crane to operate safely and complete the construction of the new multi-storey car park, it will be necessary to close a central section of Hunter Street to all through traffic from 4th to 24th September 2021.

This closure is an essential part of the Chester Northgate development’s construction.

At the same time, the closure will enable several electricity, water and gas ducts to be laid across Hunter Street into the Northgate scheme, reducing the need for further closures in the future. Pedestrian access along the full length of Hunter Street will remain open during the closure.

Northgate Street will operate as a two-way traffic flow during the closure with exits via Canal Street and the Fountains Roundabout.

In order to reduce the number of vehicles using Northgate Street, a traffic marshal will be positioned at the northern end of Northgate Street (at the junction with George Street and Canal Street), between 10:30am and 4:30pm Monday to Saturday, to ensure access-only traffic is allowed.

In addition, to ensure that two-way traffic can use Northgate Street and obstructions can be minimised, loading will be prohibited on Northgate Street between George Street and Hunter Street, Monday to Saturday between 10:30am and 4:30pm other than in the lay-by outside Chez Jules, where the current restrictions will remain in place.

All other current restrictions in the vicinity, including city centre access via the Town Hall bollards will remain unchanged during the Hunter Street closure.

During the closure, the free Shopper Hopper bus service from the Chester Bus Interchange will stop and pick-up on St. Werburgh Street outside Barclays Bank, instead of Hunter Street, and run every half-hour.

The new car park will replace the Market Car Park, which is reaching the end of its life, so no net additional city centre spaces will be added as a result and the new car park is currently scheduled to open in summer 2022.

Northgate will also include significant provision for cycle parking and the car park will benefit from extensive electric vehicle charging facilities, provide a much safer and accessible facility than the current Market Car Park and make use of sustainable materials,

Four new trees will be included in the central new public square, and there will be over 750 square metres of green walls incorporated to the car-park, cinema, market and Princess Street frontages.