You are here: Home › News › Update on works to reinstate Nicholas Street and St. Martins Way
on 12 November 2021 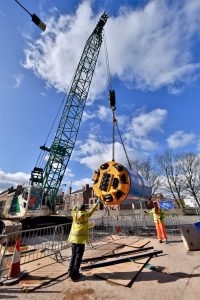 Following the first lifting of the Clockwise diversions along Nicholas Street to two-way traffic on 25th October, the reinstatement works have required the closure of one lane either side of the central reservation works to provide a safe working area and protect workers from traffic.

Once the work is complete and it is safe to do so, traffic will revert to two lanes northbound wherever possible, to reduce the impact on traffic coming into the city from the Grosvenor Road direction.

To help decrease traffic delays, some works will now be carried out overnight when roads need to be fully closed to enable power ducts to be installed to the traffic signals and for resurfacing. Diversion routes and access only routes will be fully signposted. The overnight closures will take place on:

During the two November closures one lane northbound on St. Martins Way will be maintained.

The Council is working closely with the contractor to minimise the impact on traffic and complete the work quickly, but regretfully some delays are inevitable.

To help reduce congestion drivers are recommended to plan their journeys and allow more time, consider alternative routes into the city or travel more sustainably using public transport, cycle and walking routes. Where feasible through traffic should use the A55 or via Queensferry to bypass the city centre to from the south of the city, North Wales and Wrexham.

Councillor Karen Shore, Deputy Leader of the Council and Cabinet Member – Environment, Highways & Strategic Transport said: “Despite the Clockwise diversions working well for the past year, we are aware these recent works have resulted in significant delays and caused inconvenience to many residents. Please bear with us over the coming weeks while we complete the final stage of what has been a major infrastructure project for the city.

“The new surface water drain will provide many future-proof environmental benefits for years to come, not least to significantly reduce instances of flooding and the number of untreated sewage discharges into the river when the current network is at capacity, both high profile national issues at the moment.”