You are here: Home › News › Winners of the public vote for Northgate’s arcade and square names announced
on 15 November 2021

With construction progressing well on the Northgate development, now at around sixty per cent structurally complete ahead of the internal fitouts, the winners of the public vote for the new arcade and square names can be revealed.

Over 5,500 votes were cast online over five weeks to select the winner from a shortlist of four options each chosen from more than 800 suggestions by the public earlier in the year. The winning names are: 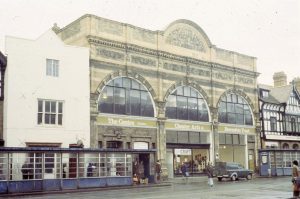 Coachworks Building in the 1970s

In recognition that there has been a coachworks on the Northgate site since 1870, the current façade was built in 1914, (formerly the Chester Library building between 1984 – 2017) and outside on Northgate Street was also the coach stop for tours and excursions into the 1970s. The original 1914 Westminster Coach & Motor Car Works façade is being restored into a new arcade and will provide a stunning arched entrance into the development. 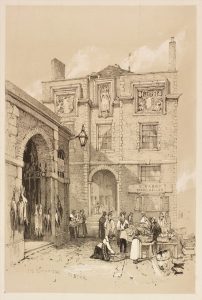 After the name of the original Market building opened in 1698 that was located in Market Square, very near to the Northgate site and opposite the Cathedral. The costs of its construction were shared between the town council, the King, William III, and a number of prominent Chester traders. It was a grand building with an open piazza, coffee house and shops on the ground floor, and upper rooms that included a banqueting room, a court room, and a council chamber. Sadly, the building burnt down on 30 December 1862.

The wining names will be incorporated into the fabric of the Northgate scheme when it opens next year. For more information on Northgate visit www.chesternorthgate.com.

Councillor Richard Beacham, Cabinet Member for Inclusive Growth, Economy & Regeneration, said: “When the long-awaited Northgate scheme opens next year, residents and visitors to our city will be able to explore the new Exchange Square by walking through the Coachworks Arcade; inside they will find the new Chester Market hall, a six-screen cinema and some exciting new cafes and restaurants.

“Thank you to everyone who suggested a name and took part in the final vote. In a city steeped in history, there are so many references to choose from, but it’s great that as a community we have been able to settle on two names that are so clearly connected to the area where the new development is being built.”

Councillor Stuart Parker, Conservative group committee member of the Northgate Joint Members Working Group, said: “I am delighted the public has chosen two names that reflect our great city’s abundant history and heritage, and that we can maintain a strong link to the past as well as looking forward to the next exciting chapter in the history of the Northgate site.”

The Coachworks building in the 1970s, when the home of The Chester Arts and Recreation Trust

Historic lithograph of the Exchange building and market stalls.