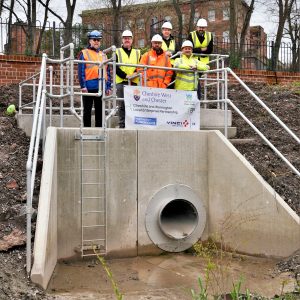 The complex and challenging task of tunnelling under the city centre has now been completed.

The new drain is a major future-proof environmental investment by Cheshire West and Chester Council in the city’s recovery from the pandemic, and an essential requirement ahead of major regeneration schemes, including the Northgate development currently under construction and set to open in the autumn.

The new drain will replace a combined sewer system that was at capacity and runs south along St. Martin’s Way, Nicholas Street, Grosvenor Road and via Castle Drive to a new outfall on banks of the River Dee. It is almost one km in length, over one metre in diameter and required eight access shafts spaced along the route, each seven metres wide and up to twelve metres deep. In total, more than two thousand, six hundred cubic metres of soil and rock were excavated to form the tunnel.

The tunnel engineers had to overcome many constraints including navigating around existing underground services (gas, electricity, drainage, sewers, telecommunications), man-made obstructions, archaeology, proximity of adjacent buildings and structures, and an underpass.

A further challenge was posed when the route was amended to avoid an existing water main and pass under Chester’s historic city walls. This required Scheduled Ancient Monument consent and permission was required from the Secretary of State, Historic England and the University of Chester. Extensive monitoring and surveying ensured there was no disturbance to the walls.

The new drain will also result in significant environmental protections and benefits; it will reduce flooding and drain bursts in the city centre; reduce the volume of water requiring sewage treatment; help cut energy use; and reduce untreated sewage discharges into the River Dee during heavy rainfall when the current network is already at capacity.

Over ninety-nine percent of the excavations from the new drainage tunnel have been recovered or recycled, in line with the wider environmental strategy for the Northgate development. In addition, over two hundred tonnes of sand excavated from the tunnel were donated to Chester Zoo by the Council in partnership with its contractor VINCI Construction UK and has been used in the zoo’s black rhino and painted dog habitats.

Councillor Richard Beacham, Cabinet Member for Inclusive Growth, Economy and Regeneration, said: “I would like to thank everyone in Chester who has been impacted by these works for their patience and understanding; I recognise that at times the works have caused frustration, but I hope residents have come to understand the significant economic, social and environmental benefits of constructing the new drain, which has been the biggest infrastructure project in our city for over fifty years.

“Completing the new drain has been a massive undertaking and it has required expertise from many contractors working in partnership to assist us. I would also like to thank them for all their hard work and commitment to this complex project.”

Rob Symons, Contracts Manager from VINCI said: “Constructing the new drainage tunnel has been a major task; requiring two tunnel boring machines working in tandem using the latest pipe-jacking tunnelling technology which enabled over eighty-five percent of the tunnel to be excavated underground rather than via an open cut to minimise disruption above ground.

“I would like to thank all our staff and contractors for their skill and commitment which enabled us to work through the pandemic with minimal disruption.”

Just over £5m was provided towards the drain costs by the government’s Getting Building Fund via the Cheshire and Warrington Local Enterprise Partnership.

Trevor Brocklebank, Deputy Chair of Cheshire and Warrington LEP and Chair of Marketing Cheshire said: “This project is an important step in Chester’s economic recovery from the pandemic and I am pleased to see that it has now been completed.

“We have a vision for Cheshire and Warrington to be the healthiest, most sustainable and growing economy in the UK and for this to happen major developments have to be supported by the necessary infrastructure.

“Now, we can look forward to Northgate opening later this year. This is a really exciting time for Chester and through our work supporting the Destination Chester network we look forward to enjoying the benefits this investment will bring to residents, businesses and visitors.”

Ian Wyatt, Business Customer Services Director at Welsh Water said: “We’re thrilled that Cheshire West and Chester Council’s innovative approach to managing surface water in the new redevelopment area is now complete. Climate change is a huge challenge for us all and it’s only by doing things differently and working collaboratively that we’ll be able to adapt effectively.

“This investment will benefit the local community and environment for many years to come and has an added bonus of increasing the capacity in the existing sewers, supporting Chester’s future development. When it comes to managing surface water, our developer services team is always open to working with stakeholders and developer customers on new approaches.”